For user authentication purpose openITCOCKPIT can be connected with an LDAP server. It is recommended to use Microsoft Active Directory. However, it is also possible to go with an OpenLDAP Server but some functions may then only be available to a limited extent or not at all.

To enable authentication against LDAP, first navigate to System Configuration -> System ->System Settings to configure the LDAP server that should be used.

It is recommended to use Microsoft Active Directory.

Before an LDAP-user is able to login to the openITCOCKPIT interface, it is required to import the user first. This is done under User management -> Manage Users ->Import from LDAP

This can also be used to test, if openITCOCKPIT can establish an connection with the LDAP server.

It is highly recommended to create at least one local administrator user, to have access to openITCOCKPIT even if the LDAP server is unavailable.

openITCOCKPIT requires that the following fields are not empty:

Users that do not fullfill thes reqirement could not get imported into openITCOCKPIT. As soon as openITCOCKPIT drops users wie will geht a warning like this 2022-01-07 15:42:06 warning: Dropped 51/100 AD/LDAP users due to missing required fields. [samaccountname, mail, sn, givenname] in the log file /opt/openitc/frontend/logs/error.log.

openITCOCKPIT synchronizes LDAP groups every 24 hours into the local database.

It is possible to force the synchronization by executing the command oitc cronjobs -f manually.

openITCOCKPIT supports the automatic assignment of User Container Roles and User Roles via LDAP groups. über LDAP-Gruppen. Obviously this is only available for users imported from LDAP.

For this purpose, openITCOCKPIT queries the current groups of all stored LDAP users every 24 hours and compares them with currently assigned the User Container Roles and User Roles.

This task can also be executed manually by running: oitc cronjobs -f.

Every User Role can be assigned to one (or many) LDAP groups. openITCOCKPIT use this information to assign LDAP users automatically to one User Role on sign-in. Due to the fact that a user can only be assigned one role, if there are multiple hits, the user roles are sorted alphabetically and the first user role is taken. This way, a manual prioritization through the naming is possible.

It is recommended to create a LDAP Fallback User Role with no user permissions. In case that no user role could be assigned to the user, the user would only have access to the Dashboard of openITCOCKPIT itself.

In contrast to User Container Roles, User Roles decide what actions a user is allowed to perform.

In this example, a new user is imported via LDAP. The system automatically assigned the User Container Roles and the User Role to the user. 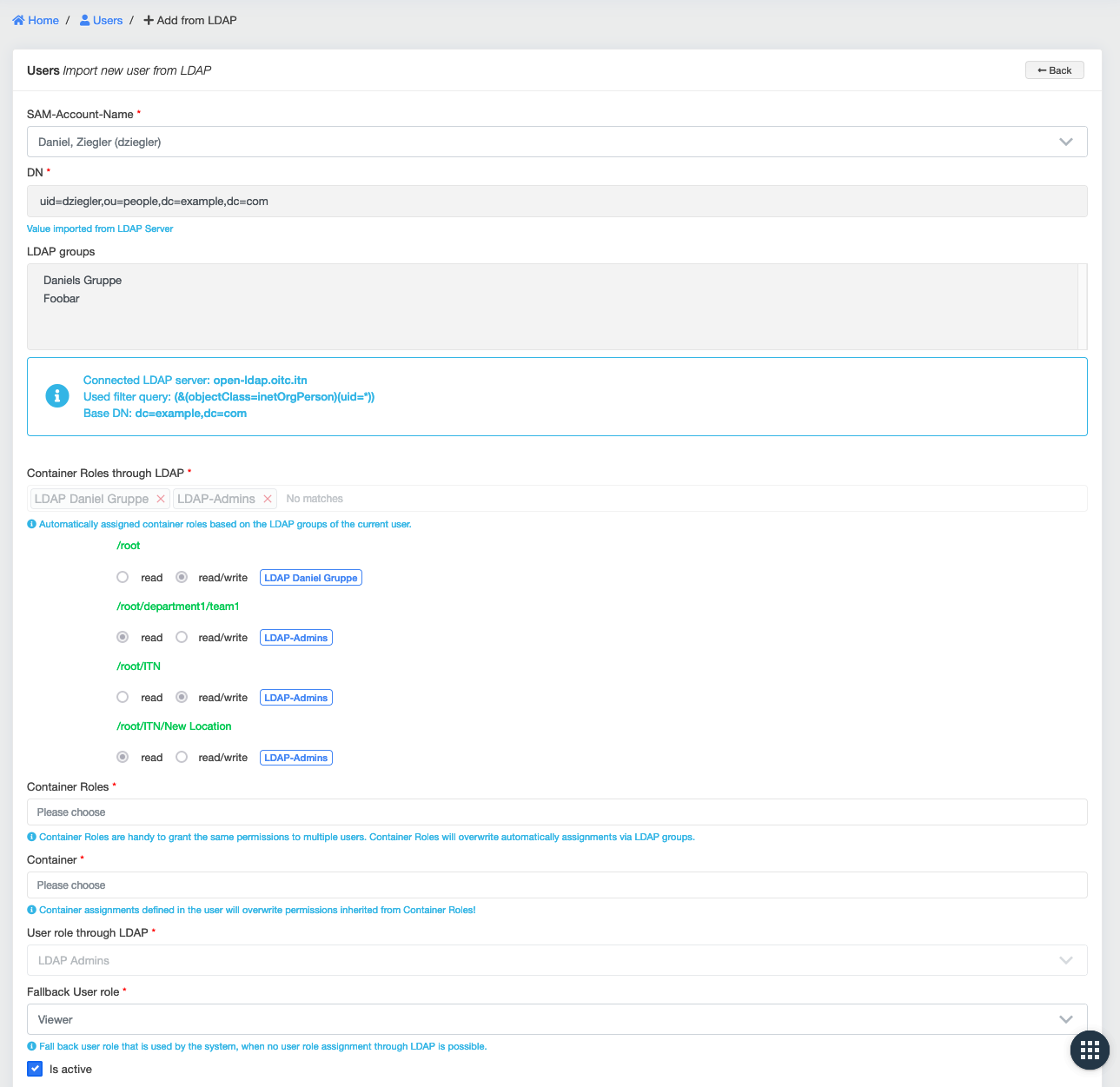